Why learning a new language is beneficial for you

There are many benefits to learning a new language. It can improve your cognitive skills, help you connect with other people, and open up new job opportunities. Knowing a second language can also be a valuable asset in your travels.

Whether you’re planning a trip abroad or simply want to learn more about other cultures, learning a new language is a great way to immerse yourself in a new culture. And with so many resources available online and offline, there’s no excuse not to start learning today.

As a Dutch person living abroad in Serbia, I am improving my foreign language skills every day. My parents-in-law cannot speak English, so it is important for me to learn their language. Additionally, I want to be able to speak to the locals. That is why I am trying to work on my Serbian skills every day, and I am also learning additional foreign languages. Currently, I am learning German, Greek, Spanish, and French. 🙂

Disclaimer: This blog post contains affiliate links. I may earn a small commission to fund my coffee drinking habit if you use these links to make a purchase. You will not be charged extra. So it’s a win for everyone! Please note that I won’t link any products I don’t believe in or don’t resonate with my blog site. Thank you!

If you wish to gain full proficiency in a new language, discipline is key. Without consistent effort, your skills will begin to erode.I used to be able to speak German when I was younger, but because I haven’t really used it over the last years, my language skills have deteriorated.

The importance of practicing regularly cannot be underestimated. Giving yourself 10-15 minutes daily to practice will significantly increase the likelihood of you staying consistent with your practice, and not losing your skills.

Work on your speaking skills as well

While you may not always have the opportunity to practice your speaking skills, it is essential to do so in order to learn a new language. Moreover, speaking the language you are trying to learn will help your brain to better remember it. In addition, you will get over your fear of speaking with a native speaker really fast!

Most applications do offer the option to practice your speaking skills, and I would strongly advise you to take full advantage of that feature.

One of the most effective methods of learning a new language is by reading as much as possible in that language. In the beginning, you likely will not comprehend all the words and sentences. However, with time and practice, it will become more manageable.

This is another fantastic way to improve your language skills – by watching TV shows that are spoken in that language. You could even start with kid’s shows. My daughter, who is a toddler, watches many Serbian shows for kids, and as she is learning, I’m learning by watching together with her as well! This is a great way for us to bond and learn together!

Learn with an online tutor

I know you didn’t come here looking for someone to tell you that it’s better to learn with a tutor. You probably already know that, and you’d rather learn the language yourself with the help of a mobile app. I get it. But there are so many great tutors available online who can help you improve your speaking skills at lightning speed!

When I started learning with a Serbian tutor, I found that I learned more in one hour than I did from several hours of independent study. There is something about being forced to speak aloud that helps the language stick better. If you can, find a tutor to work with. There are great tutors available on LingQ, Upwork, and Fiverr!

The best apps to learn a new language yourself from home

I’ve already mentioned this app before in this article, but it bears repeating – this app is my absolute favorite for learning language skills! It has a completely different approach to language learning, and I’ve been able to use it to greatly improve my Serbian, Greek, Spanish, and German.

In LingQ you’re reading and/or listening to a text. When you come across a word you know, you can mark it as such. If there’s a word you don’t know, you can translate it within the app and mark it as ‘New’. You can also select complete sentences to get a better understanding of their meaning. Plus, you can train the words you’ve marked as ‘new’ separately- how awesome is that?

Another great feature is that you can upload your own e-books and read your favorite book while learning a new language!

I’m really excited about this application because it helps me keep track of how many words I already know. According to the creator, you need to learn 10,000 words in a language to be fluent, so this is a great way to help you track your goals!

Free, and premium prices start from $ 7,99 per month

DuoLingo is one of the most beloved learning apps for a good reason! I learned how to speak French and Spanish on it, and it was so much fun! I’m not using it at the moment because there’s no Serbian course, but as soon as there is I’ll be back to learning on DuoLingo!

This app is really easy to use and understand, and you can learn a new language starting from the very first words. One thing that I really liked about DuoLingo is that it makes you review everything you’ve learned on a regular basis. This way you’re learning new words, and also making sure that you don’t forget what you already learned.

Pricing: you can learn completely for free, but if you want to go ad-free you can opt for the Duolingo Plus subscription for $ 6,99 per month (starting with a 14-day trial).

My third favorite language app is Memrise. I used to use Memrise to practice Serbian before I was able to learn Serbian on the LingQ app. You can compare the methodology of this learning app a little bit to DuoLingo, I guess. You’re following a complete course to learn a new language and it’s working mostly on repetition and gamification of language learning. It’s a great language learning app for beginners!

You can start for free and if you want to unlock all features pricing starts at $ 8,99 monthly.

HelloTalk is a language exchange application. You’ll learn a foreign language from a native speaker while you’re teaching your own native language to the other person. You can look for people who are native in the language you want to learn, and who are looking for someone to teach them your native language. It’s a messenger-like application where you can chat – or exchange voice messages. And the best part is that you can correct each other in the application.

HelloTalk is a language exchange application which allows users to learn a foreign language from a native speaker while teaching their own native language to another person. People who are looking to learn a specific language can search for native speakers of that language who are also looking for someone to teach them your language. HelloTalk functions similar to a messenger, with the added ability to exchange voice messages. The app also has a feature that allows users to correct each other.

This is a great application to learn how to make small conversations, and to really speak the language you’re learning, and it really helped me with my Serbian. I even made a new friend with it, because while you’re learning a new language, you’ll get to know the other person as well.

You can learn 1 language for free. For more languages, prices start from € 13,99 per month.

Babbel is another popular app to learn languages with. The app offers a wide range of languages to choose from, and it has a variety of different features to help you learn the language of your choice. You can use Babbel to learn a new language on your own, or you can use it to supplement your language learning in a classroom setting.

You can choose from different levels, depending on your proficiency. The app provides lessons in a variety of formats, including audio, text, and video. You can also practice your speaking skills with native speakers through the app.

The only downside is its limited free version, which does not give you a clear idea if the courses in this application fit your needs. The good part is that I can give you 3 months of Babbel for free if you sign up through this link.

Mondly is available for both iOS and Android devices. You can use the app for free or subscribe to the premium version for access to more features.

Falou is a language learning app that teaches you a language by practicing how to speak. The app uses a unique speech recognition technology to help you learn a language by Speaking it Out loud. The app is available for both iOS and Android devices.

I love drops! This app is ideal for learning a few new words in the language you’re studying while on the go. It’s primarily focused on expanding your vocabulary, but the app is designed in a way that you’ll quickly memorize all the words.

The longer you play, the more drops (new words) will be added for you to learn and repeat. The app has a really beautiful, calming design as well.

To wrap things up

Don’t forget to share this article with your friends on social media if it helped you. 🙂 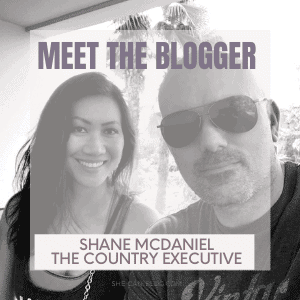 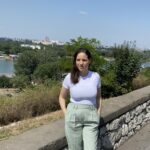 Hey there! Thanks for checking out my blog! I'm Angie, a 36-year-old blogger, mom, and Pinterest expert from the Netherlands, who currently lives in Belgrade, Serbia. On She Can Blog, I help other female bloggers and entrepreneurs who are looking for financial freedom through blogging and social media. Got questions? Don't hesitate to fill out the contact form. :)

Receive all the latest blogging tips in your inbox?

You are subscribed for the newsletter!

PS. Don't forget to check your Spam-inbox and whitelist [email protected] to make sure you receive all my emails! :)